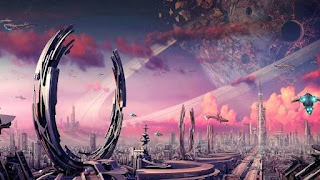 Allanism is a complete philosophy that embraces a new civilization.
Story
The rebirth of Allanism began in the Vale do Rio São Francisco region, in the semiarid climate region of northeastern Brazil.  It speaks of rebirth because it is believed that Allanism existed for many years before the human fall, in a harmonious society before human history as we know it.
But the current format of Allanism started in 1989 by a group of nine year old children who were illuminated by a blue star, they were called noble knights and came to give rise to the Allane Order.
This group played an important role in the region as a counterculture and began to perfect their own philosophy, art, events and music.
Between 2001 and 2006 they launched a small newspaper as a way of disseminating the new culture.  This newspaper was sold weekly through subscriptions and reached about 5 cities in the region through an informal network of contacts at the University of Pernambuco in the city of Petrolina.
At the same time, the term Civilization appeared and from that point onwards, the full development of religion began through religious meetings called "gnosis".
After a while the newspaper was closed, the group officially disbanded due to migrations of some members, marriages, conversion to other religions, and the Gnostic meetings stopped, yet some continued to practice the religion alone anonymously.
And the religion was perfected with the teachings in an inhospitable village in the middle of the semiarid region by the teachings of Eleanor, a very old lady who brought new revelations and the real understanding of what would be the Allane mission.
It was then that on December 12, 2012, one of the former members of the Order released the first book talking about Allane philosophy, religion, culture and civilization.
Since then, efforts have been made to preserve and disseminate the Allane culture, in an unpretentious way sponsored with its own resources.
Mythology
The Allane Mythology is formed by several stories of different peoples, all with a common origin.  We have :
The spatial history of the Alli peoples.
The enlightenment of humanity in the past.
Diverse human realms.
And stories of lost tribes of peoples.  barbarians, celts and indians.
In these stories, several heroes who were deified in different cultures predominate, but who in Allanism are considered only ancestors with high technology.
Although mythology has a great wealth in the fields of literature and expresses fundamental truths to understand Allanism.  All these stories are not to be understood literally but as art only.  Allane's true belief is philosophical...
Science and Arts
Allanism has three sciences of its own such as:
1 Fall.  Psychological and philosophical science.
2 Farr.  economic and financial science
3 Harr.  Political science
Official languages
Allanism has 2 official languages ​​like Ellene, which is a language of Latin origin.  And Allane, a language of completely unknown origin so far, and believed to have a mystical or alien origin.
Music
Allanism has a musical style called Lass that is divided into two parts, with an acoustic usually played only with guitar or piano plus voice.  And an electronic version.
Beliefs
Allanism interacts with the god All, who is the Consciousness of all reality, but does not require faith, conversion or worship.  In this doctrine, human beings are divine, works of art of creation and can be perfected to perfection and bliss in a continuous evolution in various worlds, universes and dimensions.
Nor is it believed in sin or salvation, only in natural and spiritual laws.
Life after death
Allanism believes in 3 paths according to the evolutionary degree of each living being:
1 Extinction.  Being recycled in nature
2 Rebirth.  Reborn in other worlds and dimensions where you can evolve more easily.  It would be the Paradise equivalent of some religions
3 Beatitude.  Reborn as a god in a dimension closer to Divinity.
In addition there is also a kind of hell which is the dimension where artificial beings created by genetic engineering and technology were trapped after death.
No details of this hell are given, but it is not like hellfire or a place where you torture people.  It's just a neutral place outside of all natural reality.
Purpose
Allanism does not proselytize, nor does it wish to convert anyone  Dissemination is just a means of sharing knowledge, true compassion  in the Allanes beliefs.
Individual Path
Allanism is an inner journey, a path that the aspirant to Allane must travel.  There is no objective to control your life, to found armies and faithful.  The path is individual, the true temple is nature.
Labels: rall