THE IMPORTANCE OF LIVING FOR REASON 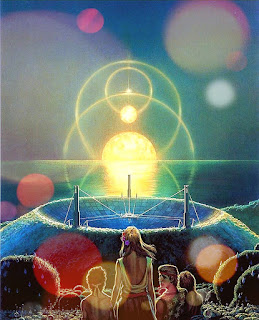 We have a free translation history here of how a nobleman was brought into the world of the clear beings in which after being shown to all the technological beauties of this civilization he was invited to enter into a machine and become like them, have a human appearance but do not cultivate emotions by being totally rational.

In this machine they passed several human people who wanted to become free of their feelings and to be totally rational beings, but the noble one when receiving in its arms a child of a mother who was going through the machine, the nobleman was afraid and decided to run away with the child. .

The light beings then went after him, until he came to the place where he could use light technology to return to earth, but before that, the light beings told him _ "please, you can go but at least leave the child , it's only fair that she stays with her mother .. "

The noble perceiving the truth in the words of the clearings returned the child to them. The clearings then helped him to return to the earth as they had promised.

And while he was leaving, they sang in the language allana to him in a beautiful farewell choir ..

Which means "maybe one day, the whole night will become day".

At that moment, he realized the mistake he had made and that the best thing for humanity is to live by reason, that most of our problems are to live by our emotions and feelings.